Mean What You Say
Posted on August 5, 2015 by j.g.lewisLeave a comment 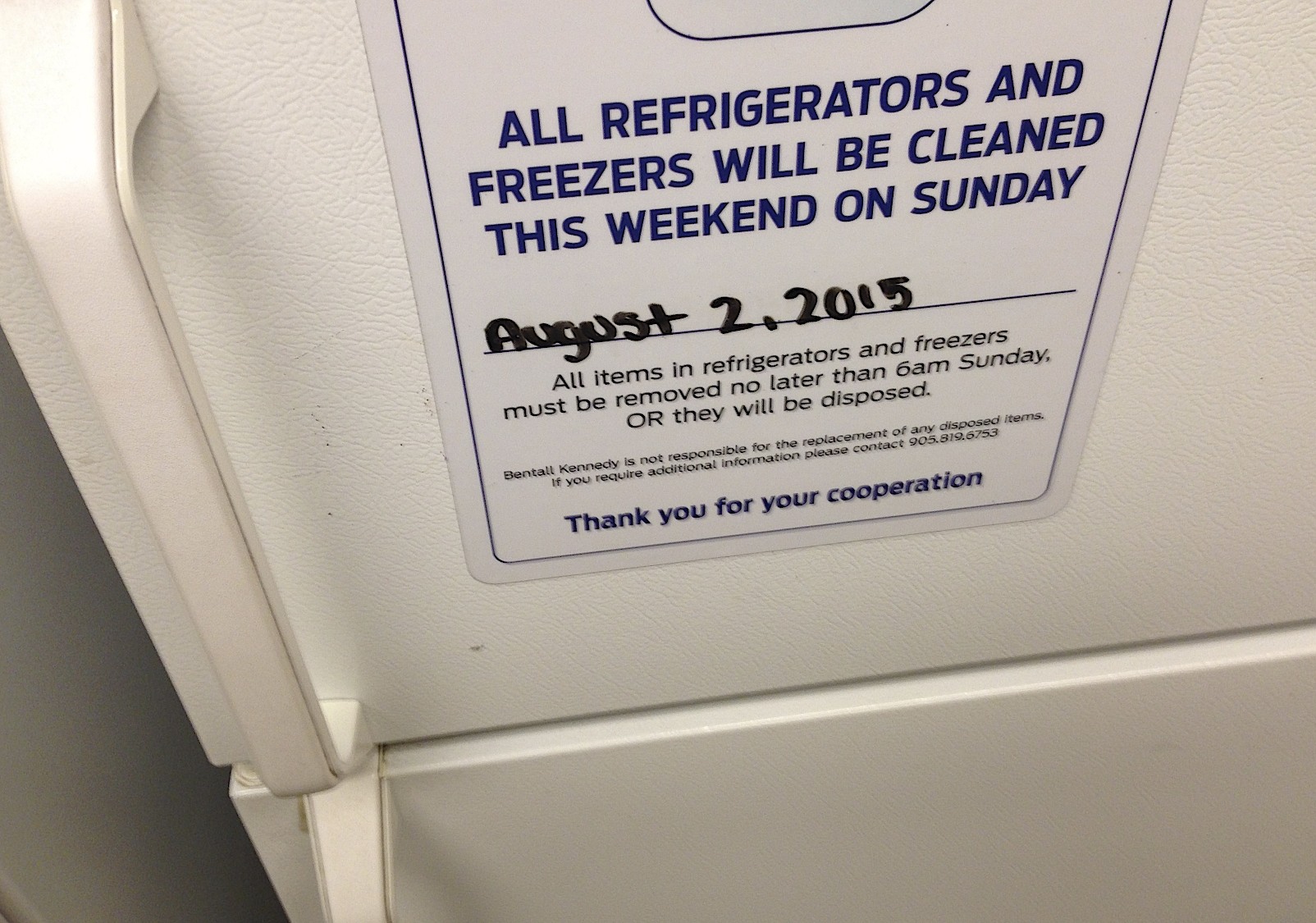 There is a small mustard streak on the crisper drawer, inside the fridge. Inside this particular crisper rests a half bag of semi-composted baby spinach. It’s not that I don’t eat a lot of spinach; I just don’t eat it from this particular bag.

And it’s still there.

Early last week, the sign pictured above was posted on the bank of refrigerators in the lunchroom at work. I presume similar signs were posted on similar fridge doors in other lunchrooms within the company’s high-rise architectural wonder.

Now I wasn’t home all day Sunday, but someone was, and the fridge is still in need of a good cleaning. Nobody showed up to do the job.

The sign, as you can see, said “all refrigerators”. It didn’t specify a certain floor, or building, or city for that matter. The sign said “all” fridges.

Now I hadn’t heard anything on the radio, or television, and nobody Tweeted, about a national or international campaign to ensure all fridges were cleaned. Nor do I recall any sort of Royal proclamation. But, you know, it could happen. The Easter Bunny still shows up, and Santa Claus, so maybe there was this new mystical entity that would, each year on August 2, visit households worldwide to empty and clean out the refrigerator.

It could happen. Most likely though, it was somebody not truly thinking about the totality of the project, and they just slapped up the laminated sign rather than thinking about how to better convey this rather timely message.

Think of all the mothers who may have spent Saturday evening baking, just so their children could leave a plate of cookies and glass of milk for these fridge elves who were going to magically appear and clean out the icebox. How disappointed were the kids who woke the next day and rushed to the kitchen for Corn Flakes, only to discover the cookies had not been eaten?

How disappointed were the mothers? Who wouldn’t want to wake up to a clean fridge?

Words are important; not only for conveying messages, but for the messages they convey. Words have always been important; how else would we know what has happened before, or be warned of what is still to come, if it weren’t for words.

If you want to make a point, make it effectively. Be specific. Say what you mean, mean what you say, and say it like you mean it. If you leave holes, sure enough, something or someone will slip through. The more open you have been, or less specific you are, the more room there is for greater interpretation, further confusion, and higher expectations.