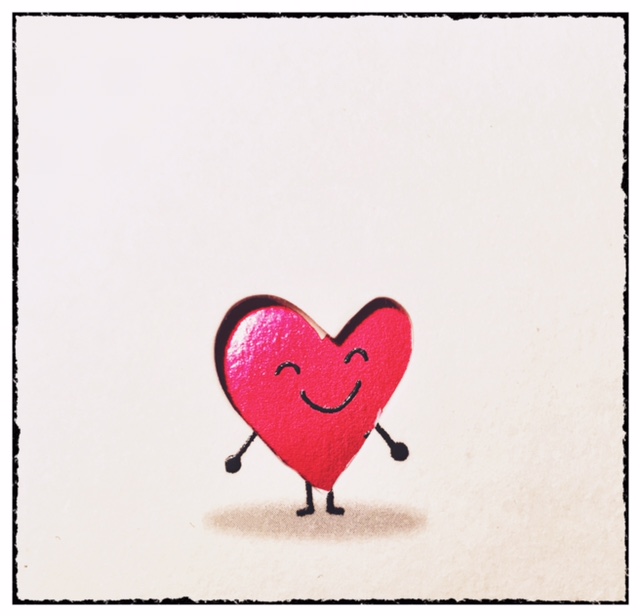 Happiness is where you find it.
It can change, it can evolve, it can
surprise and inspire you.
It may not be where you are, as
much as where you are.
Find your own happiness, look
inside first.
j.g.l. 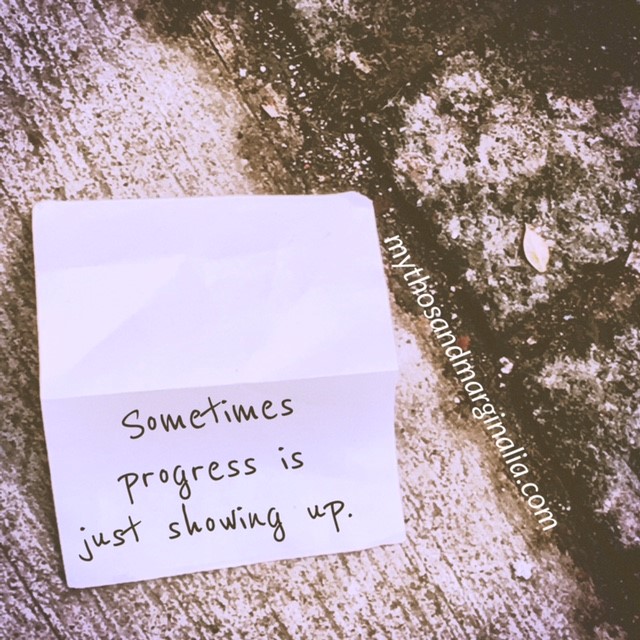 We all have things
we have to do, the chores,
responsibilities, and mindful
pursuits. Some days it
doesn’t come easy and you
tire of the effort you make to
keep things moving. Some
days it is tough, and tomorrow
you might have to do the
same things you did today,
or yesterday. Sometimes
progress is just showing up.
j.g.l. 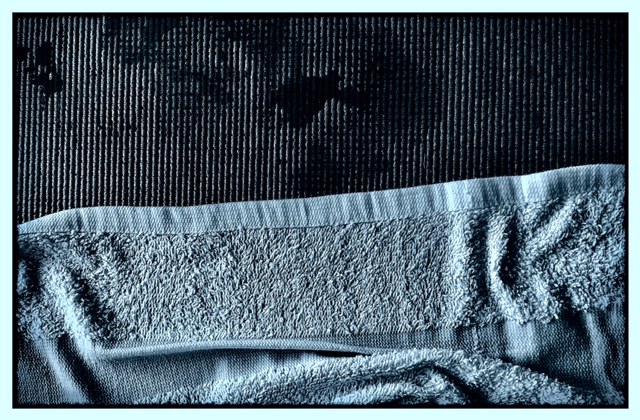 I’m back on the mat. It’s been too long.
After a few years of dedication, my practice became sporadic, or inconsistent, then somehow inconsequential. I’d sweated out hundreds of classes, then became shamefully absent from the hot room. There was no particular reason, or no real good excuse, but last week I felt it was time to get back. Again.
I wrote this piece in 2013, eight months into my yoga experience. I didn’t even call it a practice then,
I just kept showing up day after day after day. I had questions, and I needed answers.
Today I’m in a different place. The past week has reminded me where I’ve been and much work is required to get even close to where I was. I’m still curious, and I have more questions, but that will surely keep me coming back to where I need to be . . .

Can you find salvation on a yoga mat?
Can you strengthen the body while loosening the mind and arrive at this place of freedom everyone talks about? Well not everyone, not the doubtful or the disbelievers (as I was, and perhaps still am) but someone, somewhere (in fact, a lot of someones) said it was an option.
An option was all I could afford. There was little left of me, and even less of what I could believe in. I had placed my faith in the unknown before, and every time I had come back raw.
I was searching for salvation, or redemption. I was looking for a path, any path, away from the deceit and self-deprecation I had settled into. I wanted to believe in something. I wanted to, again, believe in myself; if that basic tenet is not there, is there anything at all?
Could yoga be that one thing that could lead me away, or take me further, from just existing to a place of existence? Could I be enlightened?
Could yoga heal the heart, can it take away the shackles, could it make me complete? Would it better prepare me for this race we call human? Could I even qualify for the race if I didn’t feel I fit into the category?
I was scarred, I was scared, and, more than that, I was skeptical. How could a discipline that required no ego deal with one as tarnished as mine? How could I commit to daily practice when it was a fear of commitment that led to my unraveling? (Did I just say that?)
So I didn’t commit, I just went. I didn’t ask. I didn’t question my undetermined ulterior motives and I ignored my emotional consolidation. I just went; it was better that way. If you fill your head with expectations, it leaves room for little else.
I went and I kept going. Repetition, the same 26 postures every class. The aches and pains outside began to equal those I held within. How could I say I liked it when it changed daily, as did I? Sometimes the dialogue sounded like nagging, other days it was poetry. It spoke to me. I heard more, and listened more. I could feel something (a lot of things), I could breathe, I could bend, and I could suddenly find stillness. A wandering mind is not easy to tame.
Or had I been fooled? Now eight months in, have I been trapped? Was I beginning to believe in something I could not believe in? How could I so easily be convinced this was the hardest thing I had ever done? Were these even changes, or was I just delusional? Yoga could do that. Yoga could make you dizzy. Yoga could play with your emotions (whether you wanted it to or not) as endorphins engaged and oxygen began to reach memories and mayhem in unused corners of the mind.
Coming out of Camel, was that sweat in my eyes, or were those tears? Had my sweat become blood? Had my blood turned from rust, as my heart, as my soul, as my entire being, drained its toxins and spewed out the negative thoughts? Yoga indeed removed your ego, silenced your id and seduced your entire ethos as if to remind you how powerless you were. In so many ways Yoga was like life itself; it comes at you hard, it devours your mind, body, and spirit until there’s nothing left. Then it truly begins.
Yoga uncovered my faults. What else could spill from this body?
I was beginning to feel my body was now what I owned. Before it only seemed leased. It was a place that took in anything: bad food, good wine, misused words and misplaced love. I soaked it up. I held onto anything, clung to the anger, the unrest and torrential anguish until it made me a person even I didn’t want to be with.
All I had left were years of words and emotions I could not deal with, and decades of strife, and hurt, and confusion. It covered up anything worthwhile and would continue to eat away at all I had become until I could let it go. All I wanted was to be a better person.
Some find alcohol, or religion, or any other pay-as-you-go vice. I chose hot yoga or rather it chose me. I still don’t know why. Nor could I label it a calling, for you have to be weak to be called, and I (not then, not now) could ever admit to being weak.
I could never admit the truth, but I could seek it. I could search for some sort of salvation, even absolution. Yoga seemed easier than religion. It was cheaper than therapy. It seemed available, in the now.
Yoga was a match, for me. It made no promises and there were no guarantees.
I could give even less.
Still yoga for all it is worth became a solution to most of what I had been dealing with, a cure for issues I didn’t even know I had, and protection against future troubles certain to slip under my door.
So did I need salvation and did I find it, if that’s what this is? Could I render myself powerless to something where only you have the power to transform? Was giving in to yourself, the same thing as giving up completely? Is it truly spiritual when your spirit was not always there?
If yoga is salvation then it is also a contradiction. To be saved you must have beliefs, and to believe in yoga is to believe in oneself. Can you find salvation on a yoga mat? If you can come to find yourself when nothing was there, how could you reply to that question honestly?
As much as yoga may be the answer, it remains very much a question.
© 2013 j.g. lewis

“Where something becomes extremely difficult and unbearable,
there we also stand already quite near its transformation.”
– Rainer Maria Rilke

Yoga: A Quest Of Questions originally appeared in Rebelle Society 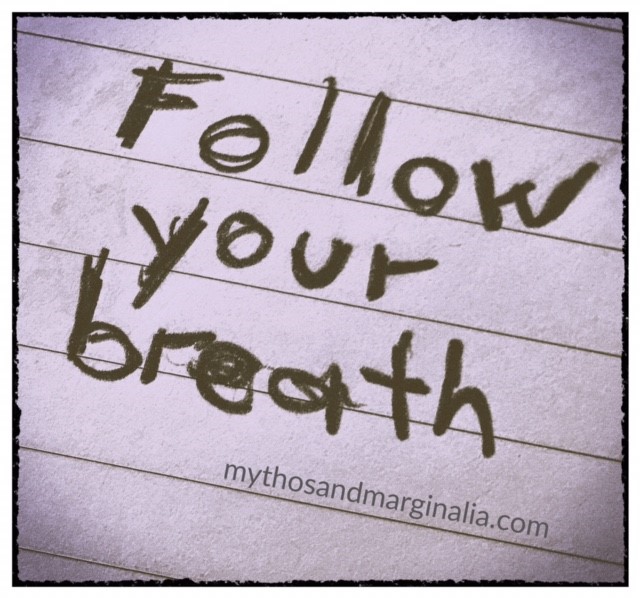 It will only lead you forward and
cannot take you anywhere
you don’t want to go.
Inhale, then exhale
all from within. Your breath may,
at times, be hesitant and life will
certainly provide moments that
leave you breathless, but sometimes
that is good and other times
you may need a minute to sit
to catch your wind.
Breathe and see, all you can be.
j.g.l.